Situated in a quiet, leafy, residential road close to the prestigious shops of High Street Kensington, the W14 Hotel London is just a 10 minute underground ride from the sights and sounds of Central London. We are just a 5-minute walk from Barons Court and West Kensington Tube stations. You can reach Heathrow Airport in 30 minutes using public transport. You can reach all the mainline train stations including Paddington and Victoria easily from our hotel.

By Road
We are located just off the A4 (from Heathrow Airport) Talgarth Road.

By Tube
From Baron’s Court tube station – Turn left from the station. Cross the main road onto Gliddon Road and walk for few minutes. Turn right onto Gunterstone Road. After walking for a few minutes, you would see the hotel on the right side at number 16-22. From West Kensington tube station – Turn right from the station and cross the main road towards the shops. After walking down North End Road, turn left onto Gunterstone Road. Walk for a few minutes and you will see The W14 Hotel London located on the left-hand side at number 16-22.

The W14 Hotel is conveniently located near many top London tourist attractions. 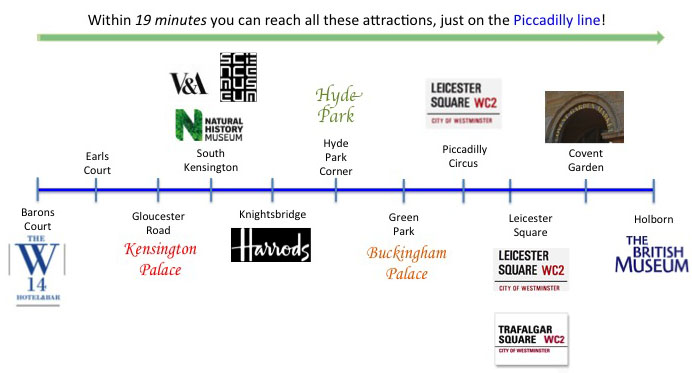 Our great location in West London provides easy access to many of London's top shopping areas including Westfield London in Shepherd's Bush, Oxford Street and Selfridges both in the heart of London's West End, Camden Market situated by the Regent's Canal, Harrods located on Brompton Road in Knightsbridge, Petticoat Lane a fashion and clothing market in Spitalfields and the famous Portobello Market in Notting Hill.

Central London is easily accessible from the W14 Hotel, and we are ideally situated with close access to many of London's historical sightseeing attractions including Big Ben in Westminster, Buckingham Palace, St Paul’s Cathedral in the City of London, The Tower Of London which lies within the London Borough of Tower Hamlets, and Westminster Abbey.

The W14 Hotel provides great access to many of London's top Museums including the popular Madame Tussauds Wax Museum in Marylebone, The Tate Modern in the Bankside area of the London Borough of Southwark, The British Museum in the Bloomsbury area of London and the Kensington museums Natural History Museum, Science Museum and Victoria & Albert Museum.

London is renowned for many must-see attractions, whether you are visiting London for the first time or coming back for a special occasion. Staying at the W14 Hotel provides you with a great base to explore many of these with easy access to the Royal Parks of Hyde Park and The Regent’s Park, the London Eye on the South Bank of the River Thames in London, Leicester Square in the West End of London, Trafalgar Square in the City of Westminster, Earls Court near upmarket Kensington and Chelsea Football Ground in South West London.

We at the W14 Hotel aim to take care of all your requirements.

Save time and money by booking your W14 Hotel reservation directly on our Official website. Secure your booking at our hotel in Hammersmith today, and only pay for your reservation when you arrive at the hotel. Please note, this does not include non-refundable rate plans.